Why did the stampede on Israel's Mt. Meron happen? | DW News

In Israel, at least 44 people have been killed and around 150 others injured in a stampede at a religious gathering attended by tens of thousands.
It happened at Mount Meron in the northern part of the country - where ultra-Orthodox Jews were holding an all-night prayer and dance celebration.
Rapt in ecstatic song and dance, footage from social media shows the crowd at the annual Lag BaOmer celebration shortly before disaster struck.
At around one in the morning, eyewitnesses said they could feel a crush beginning to build.
Mayhem unfolded. Rescue teams rushed to the scene, ferrying the injured to ambulances.
Children separated from their parents were hoisted into the arms of emergency workers desperately trying to reunite them with their families.
Police closed off road access and the military was called in to assist efforts to clear the area.
Authorities say panic broke out on the steps in this narrow passageway after people slipped and fell - and those behind them stumbled. Many of the victims were either trampled or suffocated to death.
It was the first large-scale religious gathering to be held legally since Israel lifted most coronavirus restrictions. But despite their successful handling of the pandemic, health authorities had warned against holding an event of this size.
The Lag BaOmer religious festival is particularly popular with Israel's ultra-Orthodox community, which marks the anniversary of the death of Talmudic sage Rabbi Shimon Bar Yochai. Police report nearly 100,000 people attended the gathering, which they say is four to five times as many should have been in a location like this.

The Legendary Commando Raid At St. Nazaire | The Greatest Raid Of All Time | Timeline 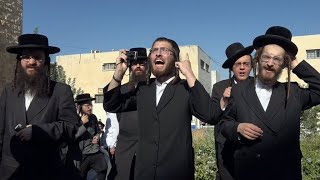 #Reporters: How the Haredim, Israel’s ultra-Orthodox, make their own rules

India's COVID crisis: How did it happen and what to expect | DW Special Report

Scottish independence: could Britain break up? | The Economist

Traveling through the Sahara Desert with camel herders | DW Documentary

Dozens killed in crush at religious festival in Israel

The life of the super-rich in Central Africa | DW Documentary